Two favorite restaurants in the city, Fervorand Sottovoce, are owned by the same company.  One of Jon’s coworkers told him about a n

ew concept to the same company, El Burladero, and we went to try it out 2 days later.
El Burladero (Uriburu 1488, between Peña & French, 4806-9247) is the newest theme for this restaurant group, and though it just opened in August of this year, it has received overwhelmingly great reviews in every outlet I have found.We just barely got a reservation for the night we wanted to come in, the only time slot they had available was 10:30pm, and it was completely packed when we arrived AND when we left.The restaurant is simply decorated, lots of framed pictures and Spanish artifacts lining the walls.  There are large chalkboards advertising signature dishes and a few seats at the bar for folks – like us – who need to wait until their table is ready.  As as perk of waiting, they offer you the choice between a glass of champagne or a small draft beer – the beer is nothing special but it is rare to find anything on draft in the city.

Once we were at a table, we were offered the same great selection of bread they have at Sottovoce and Fervor, and they have an appetizer list filled with tapas and seafood. 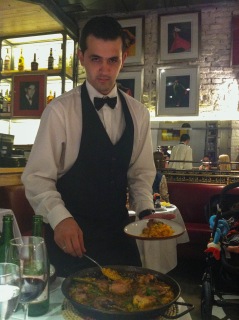 Each main course dish is large enough to share, though we decided to go against the waiter’s suggestion and order three dishes for our group of 4 people.  As a result, we had enough food for 8 people, and the waiter gave us an “I told you so” look that was virtually caught on film.  This was him dishing out our paella, the smaller portion which was more than sufficient for 4 people.  There are a few different types of paella to choose from, we chose the seafood option, though there are at least 3 other varieties.

Many of the dishes can be ordered a la carte, you can choose the protein (fish, chicken, beef, seafood…) the side and the way you want it to be prepared.  We chose the fish of the day, served with grilled vegetables “Spanish style”and a chicken dish served with rice and a saffron sauce. 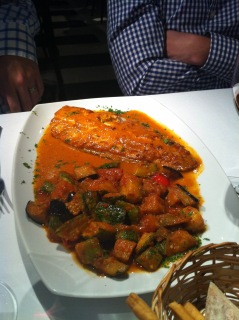 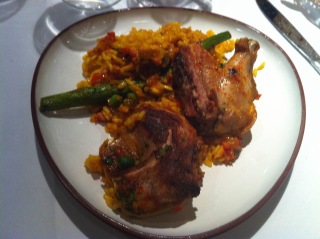 All of the entrees were tasty, fresh and quite different from anywhere else we’ve eaten in the city.  The chicken dish was a little low on meat, but considering the amount of extra food we had, I’m not complaining.  This is a great addition to our eating out repertoire, we are happy campers!

***This restaurant review was written by BAIN Downtown member and blogger, Dawn Gill.  For this and other reviews on expat life, visit her blog: http://www.dawnandjon.blogspot.com.ar/.  To contribute a review or highlight your blog, contact bain.downtown@gmail.com.